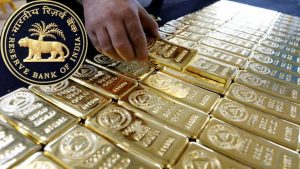 Reserve Bank of India i.e. RBI has sold gold from its reserves for the first time in almost three decades. He has become active in gold trading since August this year after accepting the recommendations of Jalan Committee . According to the recommendations of the committee, RBI can share profits with the government above the prescribed limit. The RBI has sold gold worth a total of $ 1.15 billion. An analysis of data from the Reserve Bank’s Weekly Statistical Supplement revealed that it has bought $ 5.1 billion in gold since the beginning of its business year, July and sold about $ 1.15 billion.

The move reminds us of how Chandrasekhar Government sold gold in the year 1991 to pull economy of the country back from the brink”The Reserve Bank of India (RBI) has sold gold worth $1.15 billion so far in its business year (July-June), along with buying gold worth $5.1 billion. The pace of gold sale in the current banking year has been quicker than the previous full year,Experts are of the view that the move was forced by RBI’s recent decision to transfer Rs 1.76 lakh crore to the government as per the Bimal Jalan committee’s recommendations. As on Friday, the value of gold in the country’s forex reserves amounted to $26.8 billion. when gold sales totalled just over $2 billion.

On other hand, Banks are not allowed to buy gold in India because of restrictions put by the Banking Regulations Act. They can only sell or import gold on behalf of users and traders after permission from Reserve Bank of India.

Reserve Bank of India has stopped printing ₹2,000 notes since April, 2019 as per RTI query

The value of the last week of the month has not been factored in the Reserve Bank’s data. According to the RBI’s 2018-19 Annual Report, the revaluation of gold occurs on the last trading day of every month. This is 90% of the price fixed by the London Bullion Market Association for the month. Therefore, the value of gold in forex reserves varies only in the last week of the month. According to market analysts, the revaluation of gold stock in forex reserves is done once a month. The change in the value of gold in the intervening weeks may be due to the sale of gold made in it.

Some RBI RBI officials also did not rule out the possibility of changes in the format of reporting of value of gold by the Reserve Bank. However, the reply to the email sent to the official spokesperson of RBI was not received till the time of writing the news. The Reserve Bank does not repeatedly detail the volume of gold held in its treasury. In terms of safety, central banks around the world (like RBI of India) keep some part of their foreign exchange as gold for diversification. The Reserve Bank has been making sporadic purchases of gold since November 2017 and since then it has bought nearly 2 million ounces of gold.