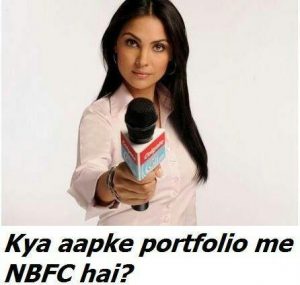 The elephant in the room was the NBFC (non-banking financial companies) sector.

Several NBFC stocks came crashing down since last Friday, Dewan Housing Finance Corporation Ltd being the leader of the pack. Nearly Rs 8,129 crore worth of the company’s market cap got wiped out in a single session.

Shares of non-banking financial companies (NBFCs) have been under pressure following concerns on tightening liquidity, asset liability mismatches (ALM) and a cut in lending by banks.

However, the latest report by Investec Securities said most top NBFCs have fair liquidity and strong balance sheets and comfortable ALM positions. They also have a decent capital position, diversified borrowing and predominantly retail asset books.

After the recent slide in the NBFC space, shares of the companies plunged up to 84 per cent from their respective 52-week highs.

Emkay Global Financial Services in a report said, “The lending reluctance for NBFCs is expected to continue. Though we expect low probability for default (due to timely RBI intervention), we would continue to prefer NBFCs with favourable ALM maturity.”

Housing Development Finance CorporationNSE 3.18 % (HDFC), Gruh Finance and Bajaj Finance are off their 52-week highs, down 15-24 per cent.

Emkay further said HFCs (except HDFC) are adversely placed on a maturity profile with liabilities maturing at faster pace compared with assets. For DHFL, around 12 per cent of liabilities (around 17 per cent of market borrowings) are maturing in 3 months against 9 per cent of total assets (3 per cent advances).

Asset financing companies, or AFCs, are better placed with an exception of Cholamandalam Finance with around 15 per cent of liabilities (14 per cent of market borrowings) maturing in 3 months against 7 per cent of total assets (7 per cent advances). Shriram Transport also has adverse ALM mismatch with faster liability maturity.

It further said Bajaj Finance is best placed with around 12 per cent of liabilities (13 per cent of market borrowings) maturing in 3 months against 18 per cent of total assets (18 per cent advances). Additionally, MMFS and HDFC Limited also have a favourable ALM maturity.

Housing finance companies came under sudden heavy selling pressure as interest rates on their debt spiked. As I mentioned earlier, one of the reasons for this sell-off was linked to the recent financial stress in the key Indian shadow bank Infrastructure Leasing & Financial Services (IL&FS) Group.

Recently, IL&FS and its subsidiaries were downgraded directly from the highest credit rating “AAA” to “Junk”. This has led to nervousness about the credit profile of other private issuers, especially NBFCs. Many investors are now rushing to sell debt securities of various housing finance companies which are heavily dependent on debt refinancing.

It must be noted that IL&FS has missed payment on more than five of its obligations since August 2018. It has total debt of US$ 12.6 billion, of which 61% is in the form of loans from banks and other financial systems.

According to Moody’s Investor Services, IL&FS’s outstanding debentures and commercial paper accounted for 1% and 2%, respectively, of India’s domestic corporate debt market as of 31 March 2018. Its bank loans made up about 0.5% to 0.7% of banking system loans.

There are concerns that the defaults by IL&FS could cause a contagion in the Indian financial sector.

Will this crisis blow up in the face?

Experts said even though lenders would now take a more measured stand on NBFCs, well-run NBFCs with proven business models across cycles and those focusing on the retail segment that have generally lower credit and concentration risks may be less affected.

“We don’t find liquidity risk, but the risk-averse stance of debt markets will likely lead to higher funding costs in the near term,” Kotak Securities said.

Morgan Stanley believes the asset side of HFCs is strong, with primarily amortising loans, hence, default risk is low. But funding costs will rise, affecting Net interest on Margins (NIMs) and growth, it said.