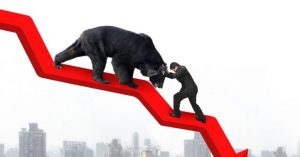 Markets has fallen so drastically and with very high amount of intensity. You won’t know understand the overall scenario by just looking at the Nifty, but the midcaps have fallen around 20% this year, and the small caps, are down nearly around 30 percent!

This is really very scary and matter of a big concern if you own most non Index stocks – in fact even the Nifty Next 50 is down nearly 15 percent in 2018.

What do you do in this type of Market Crash or Correction ?

There are number of views and opinions during this hard times, and let’s see what the situation is. Small & Mid Caps have already corrected big time since budget 2018. For small caps, this is a fall to levels last seen in end of 2016, when the market fell after the surgical strike and demonetization announcement.

If, at any time in the previous year, people in the stock market were asked about times of surgical strike and demonetization time, they would tell you one thing that they had regrets that they should have bought stocks at the time of correction.

And now roughly it is nearly two years since and we had got earnings growth little bit. There is blood on the street. No one wants to buy because well, because. Tons of bad things happening and we’ll get to that, but think of this first: Are you super uncomfortable buying now? Because your stocks will get beaten up more?

If the answer to that question is “yes!”, then it might just be a best time to start buying.

SOME FACTS ABOUT BIGGEST STOCK MARKET CRASH AND CORRECTIONS

Investors who bought when market was in fear or panic during falling market benefited the most. Markets will never give an indication before bouncing back.

Why To Invest Now?

Start Buying? We are not just telling you to sell your gold or house and buy?

If you’ve been through bear markets you know one thing – they can frustrate you with their longevity and get you super impatient. Markets don’t respect your time. Markets will do what they want to do.

But you ask some questions to yourself or do some research that how long and how deep have previous falls lasted? I have some data to share since 2007 and then there was the massive crash of 2008. Let’s assume for a moment that this is not 2008 – not because it’s special but because the factors that caused 2008 were more global in nature, and the fall was more “secular” – you had even the Nifty correcting 60% as well.

As you can see, this is roughly about the same time and same intensity as the corrections in the past.

What happened before 2007? I don’t have small cap data, but the Midcap index (which is currently down about 23% from the top) has taken slightly more severe correction – between 22% and 38%. There, we may still have a little more to go, looking at the past.

The Nifty is about 8% below it’s all time high. But the stocks in it – the 50 stocks comprising the Nifty – show a different story. Out of them, 35 stocks are down over 10% from their highs in 2018. 17 of these are down over 25% – with Yes bank, Infibeam, DHFL and India Bulls Housing finance leading the way of more than 50 percent correction.

In fact, if you look at the entire lot of stocks, about 1700 of them that we have prices for, around 1,000 stocks have fallen more than 35% from their All time or 52 weeks highs this year.

After almost 2 years of Demonetization and GST came into effect we had been continuously examining and analyzing that earnings will see good recovery and indeed they had shown some progress in the last quarter and also we started to see a small recovery in earnings (driven perhaps by the GST lousiness last year). If – and this is a big if – the banking sector NPA crisis also is done, we should start seeing recovery in PSU bank earnings by the December quarter and they have indeed been responsible for bringing down aggregate earnings in general. We can also see very good and stellar earnings from IT, Pharma and Textiles and other leading company in exports due to weaker dollar their profitability will improve.

As we had seen previous GDP data and their forward projections which was very at the higher end that shows economy itself is doing well. Discretionary spends seem to continue as usual, and while there are some setbacks due to floods, we believe the rebuilding of the flood areas will result in an even higher interest. We hear news that petrol prices will cause inflation or hit auto sales – till now, this does not seem to have happened either.

Higher Interest Rates is already Factored in by Markets

As RBI monetary policy is in October and if they are thinking to raise the interest rates so than that this already been discounted by the stock market. And on other hand as we believe that Interest rates have been at the higher levels on the back of fear that global rates are rising fast. But we must note that Indian inflation is also in control and stable, even as the dollar has spiked up to 72. Inflation could rise of course, what with India being a importing country overall, but the problem with the dollar isn’t the fact that we are net importers of crude oil but the fact that we are not getting that good amount of inflows. Most of those inflows which India is receiving are equity inflows (FDI or FPI) and in effect, with lower inflation, the way to help our currency might actually be to reduce interest rates, not increase them.

In short time Debt rates had become very volatile and very high due to liquidity pressures and concerns as well. But recently Reserve Bank of India announced some strong measures and which help in easing the liquidity fears substantially, and debt markets are settled and again back on track.

There was a growing concern of IL&FS is going to get bankrupt and the Il&FS default had created huge fears where people started to get scared to give money to financial companies, but even that will be sorted out soon as they in transition mode their fund raising measures to longer term products. At yields of 10%+, some of the corporate bonds in the market are at juicy levels.

Of course this spilled even more fear that more NBFC companies will get default And that fear is what makes people scared and sell in panic or when market is crashing.

Panic is a best time to buy things. Yes bank, DHFL and India Bull Housing Finance has fallen 70% or so. But along with it, a bunch of reasonably strong financial companies have cracked too. A Bajaj Finance might still be expensive, but it’s 30% less less expensive than it used to be. Even an HDFC Bank is cheaper, as is HDFC, Lic housing finance, reliance capital, L&T finance.

It will approximately will take upto 6 months for the crisis and mess to get resolved. It could happen tomorrow or may take some weeks or month time, of course. But it could easily go on till the general elections 2019. So there’s a thought – how does one buy if you want to?