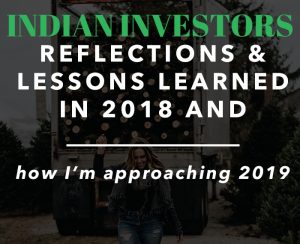 It’s time to bid adieu to an memorable year that was full of surprises, drama, turbulence, roller coaster rides, excitement and chaos in the Indian stock markets.

Before we finally close the chapter of 2018 and open the doors to 2019, let’s have a final recap at the year gone by and see what message and lessons it has taught equity investors and Indian traders in the new year.

Lessons to Remember from 2018?

2018 made a perfect start, riding high on the optimism and bull market rally of 2017.

But it short lived, Soon after the union budget bull run started to fizzle out…

Here are the important factors and events that directly and indirectly impacted the Indian stock markets during the year:

One of the key points that I again and again share with my followers and readers is that we Indian financial markets is influenced by highly inter-connected and interdependent global economy. Events and cycles which unfolds from to time in other parts of the world has a direct impact on our Indian economy and the financial markets.

In 2018, increasing interest rates in the United States resulted in an exodus of capital flow back into dollar denominated assets. As a result, the US dollar strengthened against all major world currencies, resulting in the emerging market currency crisis.

The Indian capital markets had seen one of the worst foreign investor sell off in the year of 2018. Foreign investors sold equity and debt worth more than Rs 80,000 crore during the year.

Year 2018 had been one of the worst performing years for the Indian rupee as it faced multiple headwinds owing to Rising fiscal deficit, higher crude oil prices, strengthening of US dollar, as well as massive sell of by foriegn investor.

The year 2018 saw the bring back of much avoided long-term capital gains (LTCG) tax in the Union Budget 2018-19. Investors will now have to pay 10% tax on gains exceeding Rs 1 lakh made from the sale of shares or equity mutual fund schemes held for more than one year.

The year 2018 had been one of the biggest crash for small-cap investors in recent years. The BSE Smallcap index is down 24% over the last one year. And several small-cap stocks fallen much more than 50 percent. Besides economic headwinds and other macro factors, small-cap stocks also bore the brunt of reclassification of mutual funds by the Capital Market Regulator which resulted in an outflow of funds from small-cap stocks.

The year will also be remembered for a slew of auditor resignations, frauds, and corporate governance issues at various good companies. It resulted that Indian investors now had become more careful and lost faith or trust for investing in quality companies due to Manpasand Beverages, Vakrangee, Gitanjali Gems, PC Jeweller, Shilpi Cable, Inox Wind, and so on.

The corporate governance problems were not limited to small-cap stocks alone. In fact, some big time blue-chip companies too came under the scanner – Punjab National Bank, Yes Bank, ICICI Bank, Sun Pharma, and so on.

Some of the major key surprises and events that left shocked Indian investors and markets in 2018 were the US-China trade war tensions, the NBFC crisis, the Modi government-RBI war, unpredictable resignation of RBI governor Dr Urjit Patel and last but not the least Bhartiya Janta Party losing all five states assembly elections.

The Rise of the Indian Investor

As everybody know that 2018 had not been the year of great returns and gains But there has been a big fundamental shift and paridgm change in how Indians allocate their savings. There has been growing acceptance and huge demand of equity investments as a wealth-generating asset class. It shows clearly that Indian markets still manage to handle volatility and sell off by foriegn investors and the primary reason is huge buying domestic investors in Indian stock market.

The Year of Unpredictable Buybacks