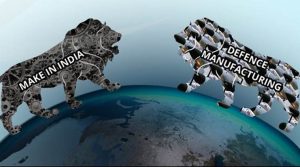 India’s armed and military forces have the great tasks and responsibility of guarding the borders of the country and also take part in humanitarian activities connected with man-made and natural disasters. Naturally enough our Army, Navy and Air Force needs to rely and have to be strong enough on weapons and arms with the most sophisticated and advanced technology.

The changes in Foreign Direct Investment (FDI) policy enhancing it from 26% to 49% and Defence Procurement Procedure (DPP) that provided greater thrust to Make In India programme with Indigenously Designed, Developed and Manufactured. The Strategic Partnership Policy (SPP) was designed to increase the involvement of private sector in defense. Initially it will be in fighter aircrafts, helicopters, submarines and armored vehicles and tanks).

Amidst the positive sentiments in defense industry, here is a look at the prospects of major private players.

Zen Technologies Ltd was incorporated in 1993 with the mission of designing, development and manufacturing of world-class state-of-the-art training simulators. It is actively involved in the indigenization of technologies for defense sector. It was the one of the first Indian company to commercialize PC-based simulation technology for training simulators. It has leadership in firearms, tank, driving, mining and unmanned aerial vehicle simulators.

At the recent Defexo18, it showcased Live Laser Based combat simulators, virtual training systems and live fire smart ranges including containerized tubular shooting range, containerized indoor shooting range, mobile robotic target system among others. In October 2017, the company received its biggest ever order of Rs 224 from domestic market from Indian Government of which Rs 156 cr was for equipment and Rs 68 cr for annual maintenance contract.

The company achieved a turnover of Rs 65.27 crores in 2016-17 compared to Rs 58.08 crores the previous year while net profit rose to Rs 7.16 crores from Rs 2.131 crores the previous year. The company runs a Combat Training Center (CTC) to help police and defense personnel hone their individual skills. With over 30 different types of simulators and systems and strong R&D, the company is capable of providing tailor made solutions for the needs of any country and force. In Q3FY18, net profit fell 97.80% to Rs 0.30 cr while sales dropped 73.59% to Rs 8.88 cr.

On a returns perspective, it has provided 98.7% on half-yearly basis while annual returns were 85.46%. Return on equity of 5.99%, on assets of 4.91%, net profit margin of 11.63% is comparable with peers but liquidity and cash flow may cause concern.
Currently the share of the company is trading at 60 rupees which is very close 52 week low. Now its a Good buy at Rs 60 we are expecting and forecasting Target of Rs 150 in next one year.

Premier Explosives Ltd was established in 1980 by Dr A N Gupta, a gold medalist from Indian School of Mines, Dhanbad and has the honor of setting up an explosives unit with totally indigenous commercial explosive technology. It supplies solid propellants for India’s prestigious missile programmes such as Akash, Astra and LRSAM. It has a wide range of products and technologies in the manufacture of explosives and accessories- emulsion and slurry explosives, LD cartridge explosives, plain detonators, cord relays etc. It has an R&D facility recognized by the Department of Scientific and Industrial Research (DSIR).

The company reported 25% growth in revenue in FY17 at Rs 231.4 crores as against Rs 185 crores previous year. Operating profit rose 36% to Rs 29.1 cr as against Rs 17.6 mn the previous year. From commercial explosives, solid propellants the company has diversified into propellant motors for Indian space programme. The company has strengthened backward integration by setting up an ammonium perchlorate plant and a rubber plant for insulating the propellant motors. It has incorporated a 100% subsidiary Pelnext Defence Systems Pvt Ltd in Telengana for the manufacture of ammunition and other defence products.

Solar Industries Ltd was established in 199583 by Satyanarayan Nandial Nuwal to trade in explosives and by 1995 it had grown to manufacturing industrial and military grade explosives. It was the first domestic supplier in private sector fo HMX and HMX compounded products to defense sector and has largest manufacturing facility for detonating cord and cast boosters.

The company reported 21.25% growth in net profit at Rs 57.68 cr and 8.11% growth in sales at Rs 465.68 cr. It has provided annual returns of 28.23%, and half yearly 7.85%. it has 25 manufacturing facilities spread across 8 states. The company reported 8.72% growth in sales at Rs 1711.28 cr in FY17 and net profit rose to Rs 185.44 cr from Rs 163.66 cr. The company seems adequately poised to tap opportunities in domestic and overseas markets. The company plans to set up a world class project for making of Bi-modular Charge Systems and fully integrated rockets which in the long run would play a crucial role in considerably reducing forex outgo.

Currently as on 8 October 2018 it was trading around Rs 1000 and we are expecting a 50 percent upside so projected target of Rs 1500 in next One year.

After lots of initiatives and reforms taken Indian Government to boost reliability and capabilities in defense sector. The Make In India programme and changes in Defense Procurement Procedure (DPP) have turned favorable for Indian defense industry. Lots of big and small industrial houses are now actively engaged in foreign collaborations to improve their defense technology supplies for various applications. Larsen and Turbo, Mahindra & Mahindra, Tata Group, Reliance, Adani groups are all encouraged by the new initiatives of Defence Ministry. The share of private sector is expected to double from current 5% to 10% in the Rs 5000 cr defence orders given annually in the country. Now this is one the biggest opportunity for Indian investors to really do some research or study small and big players which are taking entry into defense sector because this defense sector can become one of the leading sector from where multibaggers and high performance stocks can emerge in next couple of years.