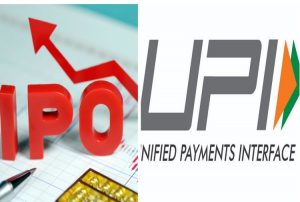 Those wanting to buy shares in IPOs can do so through UPIs, or Unified Payments Interface.

This has given retail investors — those who invest up to Rs 2 lakh to buy shares — another option to participate in an IPO process.

In a continuous process to further streamline and simply the IPO process, the market regulator SEBI would introduce an alternate payment method as UPI or unified payments interface for retail and small investors to buy shares in the Initial Public Offering. As per SEBI’s circular, the new payment alternative shall be introduced from January 1, 2019 in a planned phased manner.

It helps you transfer funds from one bank account to another without spending additional time in giving your bank account number, IFSC code and so on.

That’s because UPIs give you a virtual address, which is similar to an email ID, to carry out payments and transactions.

Therefore, all you need to do is to link your bank account with your virtual payment address just once and then proceed to make cash transfers directly, instantly and much more faster.

Bhim App, Google Tez and PhonePe are two such examples.

WHEN WILL IT BE IMPLEMENTED?

Retail investors will be able to use UPIs from January 1, 2019, according to markets regulator Securities and Exchange Board of India (SEBI).

The circular added, “From January 1, 2019, the UPI mechanism for retail investors through intermediaries will be made effective along with the existing process and existing timeline of T+6 days. The same will continue, for a period of 3 months or floating of 5 main board public issues, whichever is later”.

But from January 1, 2019, retail investors can use the UPI system through intermediaries. This will eliminate the physical movement of application forms from brokers to SCSBs. Brokers would no longer have to physically reach out to the branches of the 60-odd banks that provide ASBA facility.

WHY IS IT IMPORTANT?

For investors, paying through UPI is another alternative and fastest way of purchasing shares during an initial offer. It is also a convenient option because all you need is a smartphone.

At the moment, it takes six days for a company’s shares to make its debut on the stock exchanges.

The entire process will be implemented in three phases to ensure smooth and simple transition to the UPI ecosystem.

In a SEBI circular released on Thursday, “The proposed process would increase efficiency, eliminate the need for manual intervention at various stages, and will reduce the time duration from issue closure to listing by up to 3 working days”.

In the current regime, retail investors invest in IPO issue either via broker ASBA facility or through bank ASBA. The new alternative payment option in addition to increasing the efficiency of the current system will indeed limit manual intervention.

How UPI For IPO Works?

Step 1: Create a UPI ID on your mobile phone application.
Step 2: Fill the IPO application form and enter your UPI ID on your mobile phone. The UPI ID is a 16-digit number means it will be your virtual address.
Step 3: Your UPI ID details and information will be uploaded on the stock exchanges.
Step 4: Once the stock exchanges will verify and scrutinize your details, they will share the UPI ID with the sponsor bank — the bank which has been hired by the company to take care of their IPO process.
Step 5: The sponsor bank will get in touch with you, asking for the necessary amount to be blocked which will be debited from your account once the shares are allotted to you.
Step 6: Once you accept the amount, feed in your UPI ID again. Your bank will automatically block the funds.

HOW WILL IT SHORTEN THE IPO PROCESS?

Normally if you see currently if the investors wants to invest in IPO. Investor has to fill up the application form for IPO submitted by retail investor category via intermediaries which is then moved physically to self-certified syndicate banks (SCSBs) for the purpose of blocking of funds will also come to an end.

In the new payment mode via Unified Payment Interface, investors would be required to create an UPI ID at the bank. And there after in accordance with the existing rules, IPO bid details will have to be provided in the IPO form along with the UPI ID on the exchange platform.

After completing and linking up the PAN validation process, the exchange would ask an investor to furnish his account details with the depository. Next the bid made as well as the UPI Id will be shared via online route with the sponsor or escrow bank that is appointed by the IPO issuing company.

Later when the funds have been received and gets credited in the escrow account of the public issue, the IPO shares which is allotted by the company would be credited into the investors demat account.

At the moment, there are two ways of buying shares in an IPO: bank ASBA (Application Supported by Block Amount) and broker ASBA.

Under bank ASBA, you personally bid for IPO shares by filling an application form. The amount of money is debited from your bank account only after the shares are allotted.

Under broker ASBA, it is your intermediary who does the bidding. The broker does the paperwork for you: he goes to your bank and fills an application form to be a part of the IPO process. Plus, he also needs to ensure that you have signed on the application form. Therefore, a broker has to fill a signed application form and send it to self-certified syndicate banks (SCSBs).

All this is time-consuming.

The UPI system has greatly benefited and was very successful in the mutual funds industry.

Earlier, buying and selling of mutual fund units would take up to three days and was very tedious process. But the UPI system has made it an instant process and very much more faster now. Most fund houses provide UPI technology as it helps their customers to trade mutual fund units faster and with more efficiency.