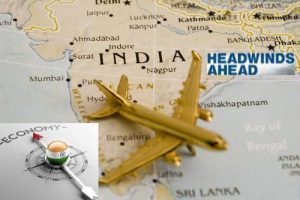 The airline industry has always struggled to take off. Just in India, over 12 airlines have been grounded in the last 20 years, and this is despite the fact that the Indian aviation market has seen a mammoth growth in this same period. The global trends have been no different. Through my first insight story, I attempt to comprehend facts and figures to more comprehensively understand the micro and macroeconomic trends that influence the industry. The following are the key inferences from the report-

a. The airline industry costs are highly volatile owing to changing fuel prices, while lower fuel prices translate into profits, the airlines find it hard to adjust prices to accommodate the higher fuel costs.

b. The industry is highly competitive and commoditized in nature, with very low opportunity to distinguish the services on offer to the customers. This leads to customers being won over by intense price wars, driving down the bottom lines in the industry.

Asia has become a hotspot within the growing aviation industry. The continent is slowly but surely becoming the number one region in carried passengers. While traffic numbers rise, a worrying trend has emerged. Local flag carriers, like Air India or Malaysia Airlines, are not following the growth of the region and contrarily, are regressing as they succumb to pressure locally and internationally.

Visual statistics on the Indian air transportation market, 6 months after the fall of Jet Airways. The market share of Jet Airways 8.9% as of the first quarter of 2019 was almost completely distributed among the other participants after 3 months, while IndiGo showed a significant increase of 4.7% market share, GoAir by 1.8%, Vistara by 1%, SpiceJet by 0.9%, AirAsia by 0.8%, and only Air India managed to increase this figure by 0.7%. This speed of distribution of passenger traffic between low-cost airlines, after the fall of Jet Airways, demonstrates the preferences of passengers and their desire to save. It is obvious that low-cost airlines will continue to retain the benefits of growth in the Indian market, in this situation, the position of Air India remains vulnerable.

It was the start of the summer season, right after the fall of Jet Airways. At the same time, but a year earlier in 2018, the market was in a phase of slow growth, see the attachment. It only means that the share of Jet Airways, immediately after the fall in 2019, was instantly distributed among the other participants, mainly IndiGo. The slow growth of Air India means that most Jet Airways passengers chose to fly with low-cost airlines.

The past few weeks have been dominated by news on Jet Airways with the banks infusing a fresh 1500cr and Naresh Goyal stepping down, the airline might see a turnaround

Despite a forecast of 6% annual growth in air traffic for next 20 years, the sector is not doing well. High tax on aviation fuel, limited capacity of metro airports and price sensitive customers are few challenges. The airfare between key metros is less that AC2 in railways and if there is an increase in fares, the traffic disappears like it did in 2012.

Considering the current expansion plan, it is moving towards the condition of excess capacity wherein the airfares are low increase capacity utilization. This is certainly not sustainable. Indigo and Spicejet have seen a drop of 70% in profit while the others operating in red.

With the liberalization of economy, the expectation was that competition will lead to better customer service and there will a choice with the customer.

Going by the current situation, there is a high probability that this sector will follow the telecom industry in which only 3 players currently exist to cater one of the largest global market.

What will be the future of India’s Airlines Industry??