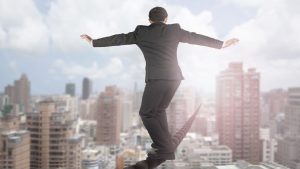 Why Nifty is walking a tightrope & facing Real-life Cliffhanger situation?

It is a real-life cliffhanger facing by Nifty currently from initially started in first week of September. Over a course of time we are continuously posting and alerting to all our followers that how 10150 – 10,800 is a figure that would decide whether the Nifty would sink or rise above. You can read our previous articles which provides you in depth analysis and research about why you should keep your eyes glued to the Nifty in coming days and also to make understand why we have conjured 10,800 as the magical figure).

But the real question that arises is how did Nifty 50 in coming days will find itself hanging by the wire?

Let’s share with you some detailed analysis at the reasons why Nifty is walking on a Tightrope.

If you last week, the National Stock Exchange’s (NSE) benchmark index — Nifty 50 — was actually doing well. In fact, the Nifty 50 increased by more than 500 points in the couple of days — it grew from 10,200 points till 10,700 but it faced huge resistance and was thrashed away by huge selling again back to 10200 levels. But the market rally — it is a sustained period of increase in prices of stocks — was mainly down to a handful of companies. It is important to note that not all company stocks contributed to this rally.

You may think that a market rally is always good for investors. But that’s not always true. There have been aberrations in the past. Sometimes market bounces or recovers on upside in case of short covering or to form a bull trap. This particular rally was one such outlier. The reason? It drove up Nifty valuations, meaning the value of stocks became very expensive and unsustainable.

High premium reflects higher growth. But the flip side is that foreign investors — who use the MSCI India index to gauge the Indian stock market — see very little value in buying expensive stocks.

INDIAN RUPEE WEAKER AGAINST US DOLLAR

The Nifty is rational sense down 25% in US dollar terms. The Nifty currently may be around 10,200 right now, but for a foreign institutional investor trading in US dollars, the index is around 8,800.

The real concern is also if you see that MSCI India is still trading at 55% premium when compared to MSCI Emerging Markets. In short, there is very little value in the Indian market for foreign investors.These are some of the reasons why foreign investors have pulled out more than Rs 93,000 crore from India’s equity and debt markets.

HUGE VOLATILITY WOULD STOP THE MUSIC

Post Demonetization , lot of excesses were committed by financial intermediaries in their greed for commissions. This suited some politicians in power, fraudster bankers, including activist banking regulator following “Swachch Bharat Abhiyan”.

Large scale outflow of foreign funds from both equities and bonds during last two years were more than matched by such local investors who were seduced by one-sided market movement accompanied by decade’s low volatility.

“Achche Din” haven’t materialized as aggregate Nifty Earning per share(EPS) growth is pathetic in last 4 years and all funds, equity and bond, last 2 years show negative Net Asset Value(NAV).
Volatility spike will make them sit on their hands. And that would stop the music.

The trade war between the UNITED STATES and China shows no signs of getting resolved. Nobody can predict which direction the crude oil prices will move in the coming months.

Currently, the global crude oil prices are trading around $84 per barrel. That’s not at all good for India. Crude oil if it trades above $70 per barrel is bad news because India is a major importer and one of the biggest consumer of oil. To summarize, the more expensive crude oil is, the higher the country’s import bill will be. As a result, the country’s current account deficit will balloon further and will affect our balance of payments in long term.

The US sanctions on Iran will be enforced from November 4. It means that India will face US ire if it decides to go ahead and buy oil from Iran. But then again, Iran allows India to buy its oil at a cheaper rate. This gains greater significance against the backdrop of rising global crude prices. But in the end, if New Delhi decides to abide by the US sanctions, the petrol prices would increase further, which would consequently affect the stock markets too.

Nifty is also very much depended over Indian politics like forthcoming outcomes of 5 states assembly election and Lok sabha elections 2019 too. As many as five states — Chhattisgarh, Madhya Pradesh, Rajasthan, Telangana and Mizoram — will go to polls in November and December 2018. It is important to note that three of these states are ruled by the BJP. Any electoral reversal for BJP would cause further jitters in the market. That’s because Indian markets usually react well when the ruling party in New Delhi does well. The reason is simple: a unified party is more nimble. It is capable of announcing and framing new policies more quickly and is less afraid to take the tough decisions.

To sum up, global uncertainties, compounded by domestic politics, have forced the Nifty to perform a high-wire act. Right now, it would take more than the soothsayer in Julius Caesar to predict which way the Nifty will blow.

The massive rally really spiked the value of stocks and pushed the premiums and valuations even higher. But the euphoria which was built up from last two years is seems to have now been total over.

The Nifty-50 went into a tailspin. Even if you see only some companies had performed and benefited from the market rally, the punishment was given out to one and all. Majority of the companies in the Nifty suffered huge loses in the market.

The mid caps and the small caps index and stocks were the biggest losers. They had fallen more than 35-40 percent from their tops. But due to the sharp decline in stock markets, several of them are now trading very close to their historic lows.