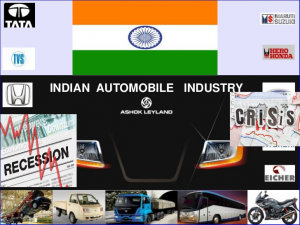 For the last few months, the Indian automobile industry has been going through a recession and now this recession has reached a record level. The country’s auto industry recorded a record 30.98% decrease in passenger vehicle sales for the first time in nearly two decades. The company sold 2,00,790 vehicles this month against 2,90,391 unit cars sold in the same month last year. This decline in passenger car segment has been recorded at 35.95%. Utility vehicle sales were down to 67,030 units in July 2019 against sales of 79,063 units in July 2018, showing a decline of 15.22%. Van Segment’s sales declined by 45.58%.

The country’s automotive industry has seen such a huge slowdown after 19 years, the last time there was a similar decline in passenger vehicle sales in 2000, when the market was broken by 35%. Passenger car sales saw a 39.86% decrease at that time. This slowdown has come when the upcoming security rules are only going to be implemented in India. Car makers and component makers have spent about Rs 80,000 crore in molding vehicles according to these rules. Now, if the market condition is not better then it will be very difficult for the companies to recover from this investment.

The Indian auto industry is in Biggest Recession.

Around 75% of the job-cuts have happened in the dealership segment. And the forecasts are grim. Unless the tide’s checked, job-losses will spill over from frontline sales guys to ‘techies’ and beyond sweeping across a vast value chain spanning manufacturing, ancillaries, spares and logistics.That can be lethal for the economy.The industry makes for 49+% of the country’s manufacturing GDP and 8% of the total GDP.

Have you recently lost your job to the automobile crisis in India?

The Indian auto sector is facing one of the worst crises in history. There have been reports of nearly 3,50,000 layoffs since April this year. We know how painful it is to lose your job and your career. This is why, Webfries presents a unique opportunity to our fellow brethren who have recently lost their jobs in the automobile industry.

Companies preparing to increase margin To compensate for this loss, companies will increase their margins, which can result in worse. Increase in margins will increase the prices of cars and the loss of demand beforehand can cause a lot of damage. To emerge from this recession, SIAM has demanded an immediate GST rate reduction on passenger vehicles, with SIAM saying the rate should be brought down from 28% to 18%. In contrast, the ministry and road transport and highways have already recommended 10 to 20 times the registration fee depending on the model of vehicles.

Millions of jobs in crisis in Automobile Industry

This recession has also directly affected the employment of the people. Maruti Suzuki, the country’s largest carmaker, has laid off 6% of its workforce, with Nissan India recently sacking 1,710 employees. Renowned automotive companies are uniting and pleading with the government for help and finding ways to overcome the recession.

The slump in car sales and demand is not just affecting the latter industry but also the auto ancillary companies and steel industries that depend directly on them. The vehicle and component makers are reducing their contract workers and shutting down production for some days to save costs.

According to Mr Anand Mahindra, “The most obvious and welcome first aid would be some temporary relief on the GST front — either by modifying the slabs, or, if that is not possible, by removing the cess”.

The cost cutting measures are such that the office air conditioning systems are switched on at 8 a.m. and turned off at 5 p.m. Work from home is encouraged too.Along with top Indian companies, Bosch Ltd too announced five days shutdown at its Gangaikondan plant in Tamil Nadu.

Million of people are losing jobs as India’s auto crisis deepens. Initial estimates suggest that automakers, parts manufacturers and dealers have laid off about 350,000 workers since April. Manpower is the only variable factor for companies and more workers will face the axe in future.The auto sector, which contributes more than 7% of India’s GDP, is facing one of its worst downturns.

The downturn in Auto Industry regarded by industry executives as the worst suffered by the Indian auto industry – is posing a big challenge for Modi’s Govt as it begins its second term at a time when India’s jobless numbers are climbing.The malaise has been spreading across much of the industry, both in terms of vehicle type and components as well as geographically in India’s manufacturing hubs.

The slowdown-hit Indian economy may soon get a booster dose from the government with Finance Ministry working on a stimulus package for the industry may include a slew of financial measures ranging from tax cuts, subsidies, and other incentives. This could also include measures by the revenue department to ensure honest taxpayers are not harassed and those who commit minor or procedural violations are not subjected to excessive action, also to address the issues of raising consumption by providing more money into the hands of consumers and reducing the prices of consumables by reducing indirect tax rates of a host of consumption items.

A separate package is being looked for the auto sector , the industry has sought lower GST rates on automobiles and introduction of a scrappage policy that incentivizes new purchase. This is expected to beat the slowdown that has resulted in passenger car sales plunging 35.95 percent in July.

The Government will, however, to weigh the size of the stimulus package given less than encouraging revenue position and a fiscal deficit that has risen to 3.4 percent in FY19 due to expansionary policies of the previous governments. It has also been kept at a high of 3.3 percent of GDP in FY 20.

I am disappointed with the domestic auto industry blaming recent slump of car sales on the Indian tax system and emissions norms when they have failed to grasp the needs of the millions of urban buyers like us.

People like me are more than capable of buying a car but won’t because of the prevailing conditions. What the industry should do:

1. Lobby the govt to improve the traffic infrastructure, instead of reducing GST. Alot of people value time over vehicle ownership and will be more than happy to take an Uber instead of sitting in traffic wasting time. Not to mention the stress induced from driving.
2. Quit milking the fossil fuel cow and realize we’re already behind on the race to electric. We should have had at-least 100+ electric models by now ! Else lean & ruthless startups will be more than happy to gobble up market share.
3. Go back to govt and demand subsidies for charging infrastructure, which they would love to already push, considering political reasons.
4. At-least start talking about ADAS based safety features. I know India is price sensitive but a substantial amount of people prioritize safety !
Of course I may be oversimplifying, but in this slowly-stagnating economy, pivoting is the need of the hour !