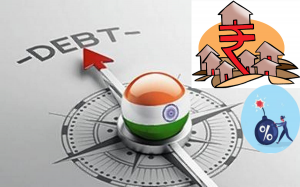 Thousands of small firms face an existential threat as working capital loans become inaccessible. Bloomberg says IL&FS’ sudden insolvency last year triggered a crisis of confidence and increased financing costs for India’s $55 billion shadow banking industry – the backbone of the country’s financial system. That has translated into higher interest rates, greater collateral and, most importantly, fewer refinancing options for borrowers, who have long depended on loans against property to tide over credit crunch. Earlier, India Ratings research showed loan defaults rose to 1.77% in the 12 months through January 2019 from 1.05% in January 2018.

Do you think Indian Economy will be able to sustain or go into a Recession.

IL& FS crisis was a failure of management, regulation, rating & auditors all combined. Definitely indicates that nexus can cause systemic failures. It happens in United States of America too – cause human greed & ingenuity is a dangerous combination. Easy & excess availability of finance has created an asset bubble.

Indian banking industry is going through a major cash crunch which is directly impacting the cash flow in NBFCs, which further are cracking the bridge to fund un financed sector.

Do you think government will look into it and might come with some reforms.

Indication of economic parameters that Indian Economy is Slowing

1) NBFC are in cash crunch, dip in NPAs and not funding. Credit growth below 4% .
2) Banks are skeptical of funding , specially to FTUs and Retailers. They only funding to fleet owners.
3) Axle norms notification , a ridiculous step by Govt which legitimate overload and stop new investment , hiring by OEM.
4) Cash circulation in economy are less as capital investment are down at 15% of GDP.
5) Lower consumer sentiments.

NBFC play vital role in bridging the gaps between financial institutions and in tapped or ignored companies by bank. First due the high pressure of being every penny in the system government have imposed GST (people who know about GST will agree that it’s not just about bringing 1 tax but also brings many cash entries into system). Second NBFC cash crunch which is not letting to fuel in enough money in businesses to perform and survive. Third businesses themselves are getting low on TO and revenues. With all this what do you think we will head in next 6 months.

There is a crisis in India’s auto sector as India’s domestic passenger vehicle sales fell for the ninth straight month in July. The trouble in the auto sector has led to massive job losses as well.

From spiraling bad loans to sinking profits and from liquidity crunch in PSBs to strain in shadow banks, the Indian banking system has seen them all in the last financial year. In light of all this, and in the event of the BJP coming to power with a majority, the Annual Budget was expected to deliver well on the challenges facing the bank.

Following is the set of challenges the banking industry is facing and the provisions in the Budget to tackle them.

Budget: The NPAs of PSB that stood at 11.50% moderated to 10.00% of total advances last year. The success came on the backdrop of Insolvency and Bankruptcy Code that helped the banking sector recover 4 lakh crores of the bad loan in the last 4 years. The budget made it clear that IBC is here to stay and that the Govt. along with the RBI will further strengthen the IBC and make it more legally robust.

Budget: The budget called for an infusion of Rs. 70,000 crores capital into the banking system. The infusion will help the banks to lend more freely as the additional capital will cover their provisioning.

Positive Intervention divine action required to get out of the crises !!!

Do you think we will face another round of market correction and then recession.

Global institute IMF predicted the next year growth to decline and an all time high unemployment rate are all an indication of what India is heading to.

Everything in the economics is interrelated, an all time high unemployment and the cost push inflation for the industries are totally connected to each other.

India got lucky after demonetization that the liquidity ie the cash available with the banks suddenly increased and they were able to put their money in the mutual funds and other lending purposes but with cash again becoming the king of the market, banks are facing a liquidity crunch.

When the prices of crud oil fell to an all time low, there was no change in the domestic market and the benefit of which was used to spend to narrow the fiscal deficits. Again Luck!

Top corporate’s our reliance and its subsidiaries, Jet, the big employers are just not in mood to celebrate their balance sheets.

Crisis like IL&FS, scams by Nirav, Choksi have all put a big question mark on the good governance.

Rating agencies and auditors to be punished, as they are supposed to go by facts not by drama!

Is the threat real or is it being blown out of proportion? Will the ethical businesses will be the greatest sufferer in this case?