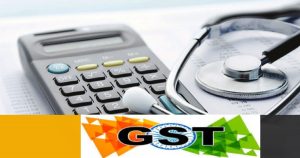 The finance ministry may impose 5% goods and services tax on certain items currently exempt and hike rates on some from 5% to 12%, Business Standard reports, citing government officials. For example, private health and education services, which are currently outside the GST ambit, could be taxed. The reason: September GST mop-up fell to a 19-month low of ₹91,916 crore, against a monthly target of ₹1.18 lakh crore. Times of India says the government has formed a 12-member committee of senior GST officials to boost collections and plug leakages.

GST ON HEALTHCARE AND EDUCATION SECTOR

Revenue shorfall prompts govt. to consider taxing exempt goods and hike rates at the lower end – will result in shrinking demand & reducing consumption.In India main root cause to all the problem is illiteracy. And in this era also people hesitate to send their children to school or for higher studies. And imposing GST to this costly education will further discourage literacy in the country. Government should actually seriously think about this.

The best option for govt to boost GST is to tax air at 100 % per inhale in one second. Education fee itself is a bomb. Why are you going to add gst to that?

Somethings will never change in this country. Even by offering free education, illiteracy has been a main issue in India for a long time. By applying tax to education services, it will demotivate youngsters from pursuing the education.

Rupees one lakh crores is the unwritten monthly goal for GST collection, as the government needs to collect around this figure in its endeavour to meet its fiscal target besides compensating states for losses. Anything in excess is most welcome and shortfall is cause for concern.

The September 2019 collection of Rs. 91,916 crores is the lowest collection since February 2018, besides being the lowest September figure in the last three fiscals. The saving grace is that we are still slightly over the monthly target for the first half of 2019-20.

GST collection figures are good indicators of the state of economy and the direction it is heading. It certainly is going downhill and the tide has to turn quickly. GST shortfall may turn into next worry for the Govt.

The sluggish growth in goods and services tax (GST) revenue receipts, unless reversed quickly, could poke a Rs. 40,000 crore hole in central government finances by the end of this fiscal, analysts warned on Wednesday, even as a private survey showed India’s services sector growth lost steam in August from a month ago. An analysis of GST revenue trend Credit Suisse shared on Wednesday said growth in collections in the first five months of the fiscal has been 6.4%, well below the 10% estimated for the year. If this pace is maintained for the full year, the shortfall could be Rs. 40,000 crore, all of which may be borne by the central government, considering that states have been guaranteed 14% annual revenue growth under GST laws, the analysis said.

With the estimated revenue foregone due to the reduction in Corporate tax being Rs. 1.45 lakh crores which is about 1.5 months of GST collection (these two are not directly related), it should not become a double whammy.

This pace of shortfall in GST revenue, is a matter of concern for all the stakeholders. If it continues for rest of the fy 2019-20, the shortfall is estimated around ₹40,000 Cr., all of which has to be borne by the Centre, only, as the states have been guaranteed by the Center, a 14% annual growth in their GST revenue. In return, the Centre will have no option but to increase the rate of GST, or new levy. Naturally, it will be a burden on public, and it may further erode our economy. We are maintaining budget deficit around 3.5 %, and our GDP has fallen down to 5%.

For revival of the country’s economy, a Center – States Council, like GST Council, is required to be formed, consisting of imminent persons across all parties nominated by the Center and the states, both. Few apolitical members may be also nominated by the President. A joint effort is required by all the stake holders. A new measure may be adopted by making IRS (Customs & Central Excise) officers’ cadre ‘All India’; and Center’s officers may be deputed to states, and states’ officers may be deputed to the Centre. It will create an all India uniform culture in taxation.And, they will learn from each other.

The coming months are crucial and plenty of things must move in the right direction. With the festival season underway can we hope for the better?