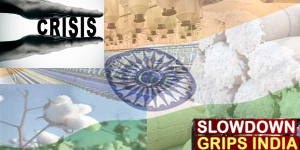 About one-third of the production has been stopped and the mills which are running are also facing huge losses. If this crisis is not overcome, then thousands of people can lose their jobs.

According to the Northern India Textile Mills Association, Indian yarn is no longer competitive in the global market due to state and central GST and other taxes. Cotton yarn exports fell by 34.6 percent year-on-year in the April-June quarter. In June, it has fallen by up to 50 percent.

Indian cotton yarn exports in June 2019 were the lowest in the last five years. The textile industry is passing through a crisis. Poor demand in export and domestic markets, lack of skilled labor, and high raw material costs are all affecting textile units.

Now spinning mills are not in this situation that Indians can buy cotton. If this is the situation, then in the next season, there will be no buyer of 4 crore bales of cotton worth about Rs 80,000 crore.

Exports of yarn, fabric, and made-ups grew over 50 per cent from 2008 to 2018 but yarn exports saw a steep decline in 2019. 3) China is the main market for Indian yarn. However, it gave duty free access to Pakistan in April this year and Bangladesh and Vietnam already have duty free access.

Significantly, in the Indian textile industry, about 10 crore people are employed directly and indirectly. It is the most employable sector after agriculture. In such a situation, there is a possibility of people becoming unemployed on a large scale. Therefore, the Northern India Textile Mills Association has demanded the government to take immediate steps to save jobs and prevent the industry from becoming a non-performing asset (NPA).

The Indian cotton-spinning sector is in dire straits and is facing a crisis not seen in the past one decade, according to an apex body representing the industry.

This industry is being destroyed by many problems like high interest rate on debt, high cost of raw materials, cheap imports of clothes and yarn. Indian mills are losing 20 to 25 rupees per kg due to high raw material. Apart from this, cheap textile imports from countries like Sri Lanka, Bangladesh, Indonesia are double hit.