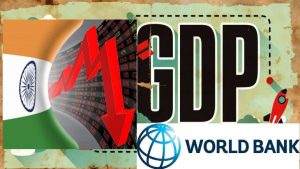 The World Bank has slashed India’s GDP growth forecast for the current fiscal to 6% from 7.5%. India’s economic slowdown is “severe,” largely due to external and cyclical factors, including a decline in consumption, the Washington-based institution said. Moreover, the financial sector is becoming a “drag” on growth. Earlier, the RBI and rating agency Moody’s had lowered their estimates for India’s GDP. In a bid to spur investments, the government recently cut corporate tax. A reduction in personal income tax is also being considered.

If all the steps Government has taken doesn’t work to contain economic slowdown then perhaps Government has to resort to Quantitative Easing to get the county’s economy recover from slowdown. Had Government not gone for Demonetization and poor implementation of GST then this pathetic situation wouldn’t have hunted Indian economy.

Rate cuts, QE and stimulative fiscal policy may not yield the desired boost to growth policy makers are hoping for – domestic demand is weak and continues to weaken as sentiment wanes. I envisage significant headwinds ahead, particularly for the financial/banking sector in India which are not well capitalized and seem highly exposed as defaults continue to rise.

A liquidity crunch combined with rising defaults will likely result in multiple bank failures – particularly worrisome as India offers little to no protection for savers against bank failure. India is actively seeking to tap international markets for the sale of long term government bonds, loans and investment. However, considering the significant risks and fragility of its banking sector, capital flight rather than inflows seems more likely in the short-medium term.

Whether India really comes into the vicious cycle of economic slowdown and recession will be clear by Diwali at the end of this month! World Bank estimates GDP growth for 2019/20 at 6% against RBI’s estimate of 6.1% and Moody’s estimate at 5.8%! To me, it will be in bandwidth of 5% to 5.5%! Q1 GDP growth was 5% and Q2 is expected to do worse! one thing to note here – all these estimations are considering the presumption that India will not come under the vicious cycle of slowdown and recession and there will be an upward tick in Q3 onwards!

The World Bank expects the South Asian economy to grow at 5.9% this year, lower by 1.1 percentage points from its April estimates. It also cut growth forecasts for Sri Lanka, Maldives and Bhutan, while raising those for Nepal and Bangladesh.

What steps, policies and reforms should government take to pull India out of the current economic slowdown?